A Reputation To-Do List for the CFO to CEO Transition 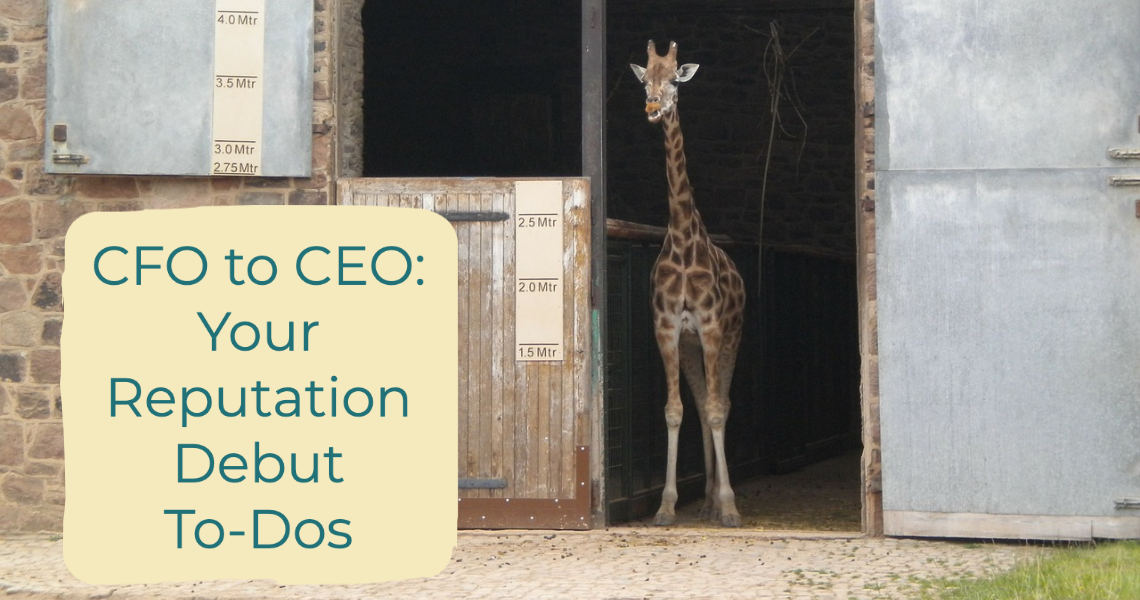 Despite these two high-profile examples, CFO to CEO transitions are not that common. A 2015 Korn Ferry study of the global Forbes 2000 revealed that only 13% of CEOs had come to the role from the CFO seat.

Both upcoming CFO promotions follow long working relationships. Rousseau worked together with Rovinescu for more than a decade, while Strain joined Sun Life in 2002 and was named CFO in 2017.

The long tenures of Connor and Rovinescu mean their personal brands are very much intertwined with the corporate reputation of their employers, leaving the incoming CEOs with big shoes to fill from a reputation perspective. Rovinescu was named CEO of the year three times and, notwithstanding recent events, saw the share price increase over his tenure from less than a dollar to almost $53 earlier this year.  Connor, likewise, was recognized as Canada’s Outstanding CEO in 2017 and Ivey Business School Leader of the Year the next year.

As former CFOs with responsibility for investor relations, both Strain and Rousseau may understand more than most what is at stake. While some investors may bet on the new guy and the share price may rise over time, data from FTI Consulting suggest that shareholders are more likely to sell shares around CEO transition.

“When CEOs change, investors are more than twice as likely to sell shares in a company as they are to buy them. All things being equal, nearly 40% of investors said they would sell a stock solely on the basis of the new CEO, the FTI Consulting survey found, while only 15% said they would buy the stock on the same basis.”

The move from CFO to CEO requires some deliberate attention to reputation across your stakeholders to make the transition a success. How do you do that? Here are five priorities for your first 90 days.

At the same time, because you were previously the CFO, you can’t come to those meetings empty handed; you need to give them something to be excited about. Like shareholders, high-potential employees will be watching your early moves to decide whether it’s time to move on.

Among them will be those who believe someone else should have gotten the role (perhaps themselves), or that are upset that the torch (in the case of both Sun Life and Air Canada) is being passed from white man to white man. Ignore this at your peril.

If you haven’t already formed top-to-top relationships with your clients and partners, make it a priority. New leadership is a chance to signal a change of approach or reset a relationship. But it’s also an opportunity to demonstrate strength if you have upcoming negotiations.

You can do this one to one, but also through peer groups like the Business Council of Canada, peer-to-peer forums like MacKay CEO Forums and volunteer boards like CivicAction or the BlackNorth Initiative. Knowing your peers outside your day job is an under-appreciated asset.

These points are not in sequential order – if you are already CEO, you don’t have that luxury. If you expect to get the CEO role, start now. Most of these things you don’t even need CEO or board permission – you just need to pay attention to different things. You will be happy you did in the event that the transition happens as part of a shakeup – through an unexpected death,  pressure from activists, or in the midst of a crisis.

In that situation, the CFO may be seen as a “safe pair of hands,” especially if you have operational experience as this McKinsey article notes. You know the valuation drivers of the business and have a pretty good idea of the SWOT analysis. But in the next 90 days, you need to demonstrate a wider understanding of your stakeholders and how your new role differs from your past.

Karen helps executive teams report and engage with stakeholders around issues that are material to their business. She is opinionated (in two languages) about how investor focus on ESG will change how companies access capital. You can reach her here.

If this piece feels a little too relevant, we can help.